Excellence, innovation, deal-making and individual achievement across the Japanese biopharma sector were celebrated at the inaugural Pharma Intelligence Japan Awards 2022 in Tokyo on 1 September.

Pharma Intelligence was delighted to recognize and celebrate outstanding advancements and innovations in the Japanese pharma, biotech and clinical research industries for the first time at the inaugural Pharma Intelligence Awards Japan 2022, held at the Palace Hotel Tokyo on 1 September.

Some 200 leading innovators attended the prestigious event to reflect on life-changing accomplishments over the previous year, highlight Japan’s integral role in the global healthcare market and discover new opportunities.

The sector has entered the public consciousness as never before during the COVID-19 pandemic and Japan has forged its own response to the crisis, with the industry there playing its part, helping to investigate new vaccines and drugs and produce and distribute vaccines.

Globalized Japanese firms have also had to adjust to a new global reality of associated supply chain pressures, shifts to remote working, decentralized clinical trials and study recruitment challenges. Regulators, meanwhile, responded with increased flexibility and expedited pathways that led to emergency approvals, sometimes in a matter of days.

Beyond, and despite, the pandemic, the life sciences arena in Japan continued to move ahead, with the bioventure sector in particular continuing to develop steadily and the oncology area seeing multiple important advances, from basic research through to product launches.

We would like to express deep and sincere thanks to our panel of distinguished judges, who gave so willingly of their expertise, time and effort, and also to our sponsors, who help make this event possible, and to everyone who attended the event.

The eight Awards categories span those that applaud the broader achievements of companies, to deal-making, advances in R&D and personal accomplishments.

The highlight of the evening was the presentation of our first Lifetime Achievement Award (sponsored by ICON PLC) in Japan, which went to a recipient who was recognized by our senior editors for his multiple senior research and leadership roles in the Japanese industry over the course of six decades - Dr Toichi Takenaka.

Dr Takenaka has a highly distinguished career spanning 60 years across R&D, global development and senior management, including as president and CEO of Yamanouchi Pharmaceutical, and inaugural president and CEO, and later co-chairman, of Astellas Pharma, Inc. He was closely involved in the development of several important new drugs, including blockbuster tamsulosin, and has held university professorships and key industry positions, including chairman of the Federation of Pharmaceutical Manufacturers’ Associations of Japan.

Dr Takenaka has in addition received multiple prestigious awards including Japan’s Medal of Honor with Purple Ribbon and Order of the Rising Sun, Gold and Silver Star. His acceptance speech touched on the many aspects of his long career with doses of humor and self-deprecation.

Another highlight of the evening was the Pharma Company of the Year, which in the first Pharma Intelligence Awards event in Japan went to Daiichi Sankyo Co., Ltd.

The company has made a highly successful pivot to oncology over the past few years, progressing multiple, highly effective antibody-drug conjugates and signing several related multi-billion-dollar deals. One of these assets, Enhertu (trastuzumab deruxtecan), is set to transform the treatment of HER2-low breast cancer and is in broad development for multiple other indications.

This award, also decided by our senior editorial team, recognized the strength and future potential of the company’s now well-validated ADC platform. 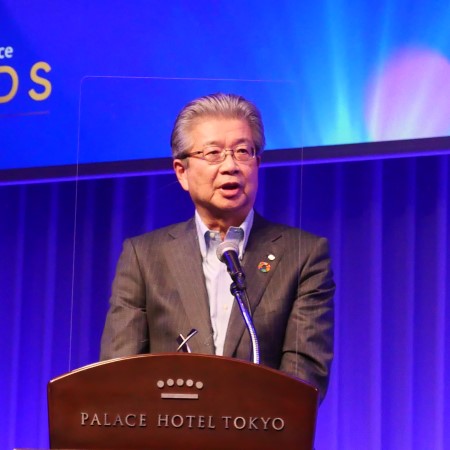 In accepting the award, President and CEO Dr Sunao Manabe highlighted the company's commitment to oncology and patients, and the reception by specialists of Enhertu in HER-low breast cancer, for which the therapy received a standing ovation at the ASCO meeting earlier this year.

Sosei Heptares also picked up the Licensing Deal of the Year Award for its November 2021 collaboration and licensing agreement with Neurocrine Biosciences, Inc. This was for a broad portfolio of novel muscarinic receptor agonists with potential in schizophrenia, dementia and other serious neuropsychiatric disorders, worth up to a substantial $2.6bn in total milestone income.

The product, approved in 2021 as the first peptide receptor radionuclide therapy in Japan, provided an important new treatment option to patients, including those who are non-responders to conventional treatments, where there are currently few drugs.

Moving to the multiple award categories recognizing the achievements of individual companies in various areas, the Biotech Company of the Year Award – for which there was a large number of entries for judging - was split into public and private companies.

PRISM BioLab, a biotechnology firm based in Fujisawa, Kanagawa prefecture, won the Biotech Company of the Year (Private) Award (sponsored by Avance Clinical). The judging panel recognized its innovative, proprietary small molecule drug discovery platform, PepMetics, which enables the identification of hit compounds for targets that were previously difficult to discover.

The Biotech Company of the Year (Public) Award (sponsored by Avance Clinical) was presented to Rakuten Medical, Inc. (an equity accounted affiliate of the public Rakuten Group Inc.), which is developing precision, cell-targeting investigational therapies on its Alluminox platform.

Finally, the Award for Best Contract Research Organization went to CMIC Group. Established in 1992, the company is the largest clinical CRO in Japan with a global footprint, providing end-to-end solutions across the entire drug development value chain.

The judging panel applauded the group’s continued efforts to develop multiple facets of its operations, including approvals and launches under its OrphanPacific operation, provision of pandemic support activities and multiple company alliances, while also delivering strong profit increases.

Congratulations again to all the companies that were nominated and to the winners on the night.