Last year, the European Commission approved a record 55 therapies containing a new active substance, including 21 medicines for rare diseases. Among them were a number of gene therapies for indications such as cancer and hemophilia. 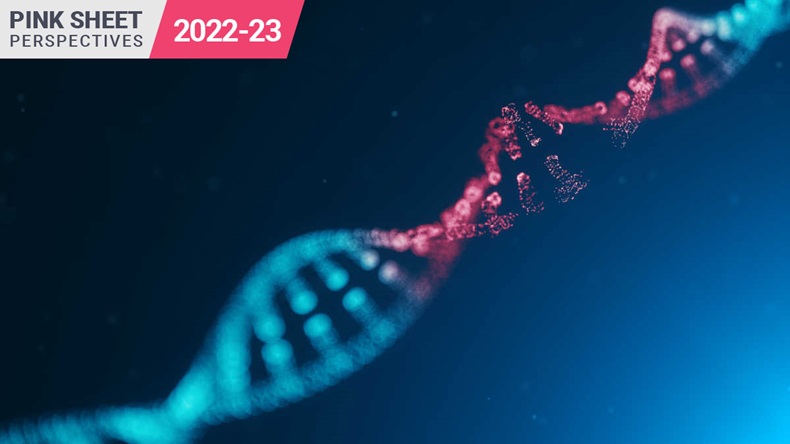 Source: Shutterstock Gene therapies were among the many rare disease products approved in the EU last year

The number of medicines and vaccines containing a new active substance (NAS) approved in the EU hit a new high last year, with 55 products receiving a centralized marketing authorization, compared with 52 in 2021, which itself was a record number.

Orphan drug approvals also set a new benchmark in 2022, with 21 medicines for rare diseases accounting for more than a third of all NAS-containing products authorized for marketing by the European Commission. By contrast, 17 orphan approvals were granted in 2021.

Reflecting the growing role of advanced therapy medicinal products (ATMPs) in drug development, five gene therapies were approved in the EU in 2022, a significant rise on the two seen the previous year. Three of the therapies were for oncology indications, while one – BioMarin Pharmaceutical Inc.’s Roctavian (valoctocogene roxaparvovec) – became the first gene therapy to be approved for hemophilia A.

Seven products received EU approval under exceptional circumstances last year, all of them for orphan indications apart from SIGA Technologies, Inc's Tecovirimat SIGA, which was authorized for treating mpox, smallpox and cowpox. Four products were approved in this way in 2021. Exceptional circumstances approvals are granted where there is no expectation that the company will be able to provide comprehensive efficacy and safety data, either because the condition is rare or because the collection of full data is impossible or unethical.

Conditional marketing authorization was granted to eight products in 2022, including Paxlovid – the only COVID-19 product to receive this kind of approval last year.  This was a significant decline from 2021, when there were 14 conditional approvals (including the four COVID-19 vaccines). Conditional approvals can be granted on the basis of less comprehensive data than are normally required, with companies having to provide additional information post-authorization.

A full list of the EU NAS-containing product approvals in 2022 can be found in the Pink Sheet’s New EU Approvals tracker.

As in 2021, oncology was the top therapeutic category in terms of new active substances last year, with 15 new drug approvals. As well as three of the gene therapies (see below), they included:

The more than doubling of the number of gene therapy approvals compared with 2021 was testament to the growing contribution of ATMPs to the therapeutic arsenal as more individualized, one-off treatments come through company pipelines. As well as gene therapies, ATMPs include somatic-cell therapy medicinal products and tissue-engineered products.

BioMarin’s Roctavian, which has orphan status and was the first gene therapy to be OKd for hemophilia, received a conditional approval in August for the treatment of severe hemophilia A.

BioMarin said that valoctocogene roxaparvovec works by delivering a functional gene that is designed to enable the body to produce Factor VIII on its own without the need for continued hemophilia prophylaxis, “thus relieving patients of their treatment burden relative to currently available therapies.”

Roctavian has not fared so well in the US, though. An initial rejection of the biologics license application (BLA) by the Food and Drug Administration in August 2020 was followed by an FDA request for more follow-up data, which pushed back the resubmission by more than two years. Moreover, in November last year BioMarin said the BLA could face a further delay, this time of three months, to the expected FDA action date of 31 March 2023, in order to give the agency more time to review additional data from a three-year analysis of the company’s GENEr8-1 study. (Also see "BioMarin Prepares Investors For A Possible US Hemophilia Gene Therapy Delay" - Scrip, 8 Nov, 2022.)

Another gene therapy breakthrough last year was Atara Biotherapeutics, Inc.’s orphan product Ebvallo (tabelecleucel), the first monotherapy for the treatment of adult and paediatric patients two years of age and older with relapsed or refractory Epstein-Barr virus positive post-transplant lymphoproliferative disease (EBV+ PTLD) who have received at least one prior therapy.

Recommending the product’s approval last year, the European Medicines Agency said Ebvallo, which was approved under exceptional circumstances, produced “clinically significant responses (complete or partial) in around half of patients involved in the main study.” These results were “considered promising in a setting where patients generally have a very poor prognosis and limited treatment options,” it added.

The third gene therapy is Upstaza (eladocagene exuparvovec) from PTC Therapeutics, Inc., which was approved for the treatment of patients aged 18 months and older with a clinical, molecular, and genetically confirmed diagnosis of aromatic L amino acid decarboxylase deficiency with a severe phenotype. It too is an orphan therapy with an exceptional circumstances approval.

Janssen Pharmaceutica Inc.’s Carvykti (ciltacabtagene autoleucel, or cilta-cel), which also has EU orphan status, is a gene therapy for the treatment of adult patients with relapsed and refractory multiple myeloma who have received at least three prior therapies, including an immunomodulatory agent, a proteasome inhibitor and an anti-CD38 antibody, and have demonstrated disease progression on the last therapy.

The EMA said that a single infusion of Carvykti, which has a conditional marketing authorization, led to “clinically meaningful responses rates in multiple myeloma patients whose cancer had come back and did not respond to previous treatments.”

Among other orphan therapies approved in the EU last year were:

One diagnostic medicine was approved under the EU centralized procedure last year: Novartis’s Locametz (gozetotide) for the detection of prostate-specific membrane antigen-positive lesions.