Outlining what changes he wants to see at the agency before he leaves, Califf also worries congressional inaction on the user fee reauthorization could affect hiring efforts. 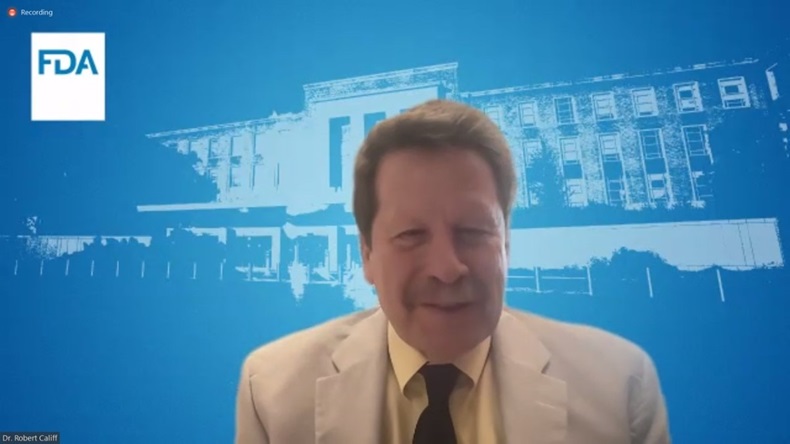 Source: Screenshot FDA Commissioner Robert Califf spoke about a number of subjects during a Q&A session with the Alliance for a Stronger FDA.

Robert Califf does not appear to be planning on running the US Food and Drug Administration after President Biden’s term ends.

Califf spoke about his vision for the agency during an Alliance for a Stronger FDA event, indicating that he hoped changes to the evidence generation system and improvements to the foods program could be in place by the next presidential inauguration in January 2025.

“Let’s say three years from now, the next election, which is sort of the time frame that I’m looking at, I want to turn over an FDA which is bolstered by much better evidence and with a winning strategy on how to counter misinformation,” he said during the 12 July event, adding that he also intended to have “bolstered these areas which have not gotten adequate attention where work is needed” by that time.

The FDA declined give any further clarification on the statement.

If Califf’s comments hold true, he would be the longest serving commissioner since Margaret Hamburg, who held the position for nearly six years under President Obama. Her successors, including Califf (his first stint in the position was 10.9 months), have each lasted less than two years. (See chart below.)

Califf does not have a term-limit per se, but serves at the pleasure of the president. Typically, all appointees offer their resignations when the presidential term ends and many leave their posts. A Biden re-election could allow him to remain, though Califf seems to be already planning for a departure.

A new president, especially a Republican, likely would not retain Califf. David Kessler is the only commissioner to be Senate confirmed and serve under multiple presidents. His term began under President George H.W. Bush and ended under President Clinton.

Califf’s floated end date may be an acknowledgement of the difficulties of the job, which includes drug, device, tobacco and food regulation. Califf told members of the House Appropriations Committee recently that officials should consider making it more attractive for someone under the age of 70.  (Also see "Califf On Getting Someone Younger Than 70 To Take FDA Commissioner Job" - Pink Sheet, 2 May, 2022.)

Califf is only the second FDA commissioner to serve two separate terms and the first to be confirmed by the Senate twice.  (Also see "Potential For Califf’s Second US FDA Commissioner Term Surprises, Excites Stakeholders" - Pink Sheet, 14 Oct, 2021.)

The story continues after the chart…

How Much Can Califf Accomplish By January 2025?

The deadline could constrain Califf’s ability to complete his agenda, although it already has been upended by new problems, such as the infant formula crisis and persistence of the COVID-19 pandemic.

In addition to clinical trial reforms and a technology upgrade, Califf has pledged to improve agency communications and fight misinformation. (Also see "Dr. Califf Returns To US FDA: What To Do First?" - Pink Sheet, 15 Feb, 2022.)

And while the agency recently moved to ban e-cigarette products from Juul Labs Inc., a temporary court-ordered stay and subsequent agency hold of the marketing denial order stalled the move.  (Also see "Robert Califf Likely To Find Many Familiar Problems Upon His Return To US FDA" - Pink Sheet, 12 Nov, 2021.)

Hiring and employee retention will remain ongoing issues no matter who is running the FDA, but Califf made clear that those efforts would be severely hurt if the pending user fee reauthorization bill is not passed by Congress soon.

Califf said prospective new employees could reject agency positions if they fear their jobs could be in jeopardy soon after they started.

“Who wants to work at an organization if you’re afraid that these jobs are not even going to exist in the next short period of time?” he said.

Califf also said a failed user fee reauthorization would force assessment goals to be abandoned because there would not be enough people to meet them.

“It’s just hard for, I think, anyone to believe that the user fees wouldn’t get passed, but it’s really important that we get them passed so that the transition into the next phase can occur without disrupting employment and function at the FDA,” he said.

The prescription drug, generic drug and biosimilar user fee programs do not expire until 1 October, but stakeholders want the bill enacted by August, so the agency does not have to notify employees whose salaries are supported by user fees that they could be laid off if the funding lapses.

While the House of Representatives passed a version of the bill, the full Senate has yet to consider its version. The bills also differ significantly, which could lengthen the enactment process.  (Also see "US FDA/Industry Thinking PDUFA VIII Could Be A Hybrid Negotiation" - Pink Sheet, 21 Jun, 2022.)

US FDA/Industry Thinking PDUFA VIII Could Be A Hybrid Negotiation

Califf: More Expedited Approvals Mean US Clearance Only The Beginning Of Learning About Medical Products

Dr. Califf Returns To US FDA: What To Do First?