The new iteration of the EU’s successful public-private R&D partnership will seek to integrate pharmaceutical research with medical technology and digital health platforms to produce innovative cross-sectoral projects in areas such as drug/device combinations and AI-based diagnostics. 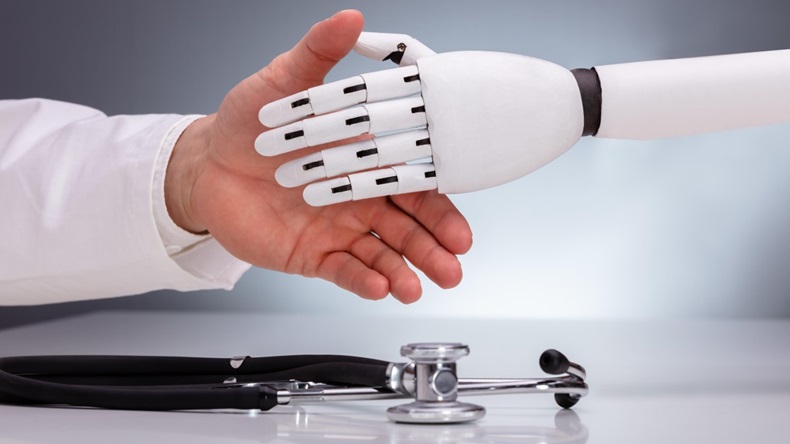 Source: Alamy The use of AI in pharmaceutical research is on the rise.

The EU’s new public-private partnership, the Innovative Health Initiative (IHI), a more broad-based and cross-sectoral successor to the long-running Innovative Medicines Initiative (IMI), says it expects to launch its first call for research proposals during the first half of 2022.

While the IMI brought together the European Commission and the European pharmaceutical industry federation EFPIA, the IHI is a new departure in that it brings in bodies representing medical technology, digital health and other companies working in the life sciences area.

“IMI started with a strong focus on the pharmaceutical sector,” the partnership said. However, it noted that science was driving “new avenues of research and development often spanning different sectors within the life science community.” It was clear, it said, that “future breakthroughs in medical science will involve cross-sectoral discoveries, such as medical device/drug combinations or diagnostics based on artificial intelligence.”

In recent years, the IMI has launched growing numbers of projects in fields such as digital health, big data and imaging. Among them are “Big Data for Better Outcomes,” AMYPAD (amyloid imaging to prevent Alzheimer’s disease), DRAGON (AI imaging-based diagnosis and stratification for coronavirus pandemics) and TRISTAN (validating translational imaging methods in drug safety assessment).

"We will work hard in the coming months to set up our new governance structures and launch our first call for proposals as rapidly as possible” – Pierre Meulien, IHI director

“Under IHI, we plan to support truly cross-sectoral projects involving the biopharmaceutical, biotechnology and medical technology sectors, including companies active in the digital area,” according to the IHI.

It said it would be well placed to exert an impact on health research and health care, both of which were increasingly interdisciplinary in nature. “We are confident that this approach will advance the competitiveness of Europe’s life sciences sector and contribute to EU policies in the fields of health and innovation.”

Pierre Meulien, who was executive director of the IMI and who continues in that post for the IHI, said that launching a new public-private partnership was “a huge endeavor and we will work hard in the coming months to set up our new governance structures and launch our first call for proposals as rapidly as possible.”

More details of the IHI will be given at an online launch event scheduled for 26 January, where Meulien will present the partnership and explain what is new compared with the IMI. A preview of draft topics under consideration for inclusion in the first IHI call for proposals will also be presented, as will opportunities to become involved with the initiative. The partners in the IHI will also outline their vision for the new initiative.

The original proposal to create the IHI was made by the commission in February 2021, and the initiative was built up during the year as part of the Horizon Europe program. (Also see "Medtech’s Place In Health Care R&I Boosted Under Horizon Europe" - In Vivo, 27 Jul, 2021.) The proposal was formally approved by the Council of the EU in November 2021 and the legislation creating the IHI came into force the same month.

As well as the commission and EFPIA (and its Vaccines Europe arm), the IHI partners include COCIR (representing medical imaging, radiotherapy and electromedical companies), EuropaBio (biotech firms) and MedTech Europe.

It will also have a new Science and Innovation Panel bringing together representatives of the scientific community and the wider health sector, including regulatory bodies and patients, as well as commission and industry representatives.

The IHI said its revised governance structure would help it to better take account of the views of different stakeholders and make sure that research projects “adequately address public health issues and the needs of end users.”

As with the IMI, the new partnership will run open, competitive calls for proposals and will continue to publish draft topic texts before calls are launched so as to give applicants enough time to work on their proposals. The IHI Programme Office will continue to manage projects that started under the IMI, many of which still have years to run. It plans to involve diverse stakeholders, including universities, companies of all sizes and other health stakeholders, in collaborative projects addressing disease areas where there is a high burden on patients and society.

The Science and Innovation Panel (SIP) has been established within the IHI to make sure there is input from a wider range of stakeholders much earlier in the process for designing call topics.

It will advise the IHI governing board on a range of matters including draft work programs (particularly the call topics), updates to the strategic research and innovation agenda, setting up advisory groups on specific scientific priorities, and potential synergies with other activities of the Horizon Europe program, including other European partnerships and other EU and national programs.

The panel will include representatives of the commission (two), IHI industry partners (four), the States Representatives Group (SRG; two), the scientific community (four) and up to six other permanent panelists representing the wider healthcare community. The SRG is an advisory body comprising representatives of the member states and countries associated with the EU’s research framework programs.

The commission, industry partners and the SRG will nominate their own representatives. The chair of the SIP will be appointed from among the four representatives of the scientific community and will be invited to attend governing board meetings where relevant, the IHI noted.

In addition, experts with specific scientific or technical expertise may be invited to discuss particular subjects with the panel.