While the FTC referral is not unique, this seems the first time US FDA has cited intent to delay generic approval as a ground for denying a citizen petition. With Califf's confirmation hearing suggesting some bipartisan consensus on the issue, FDA might soon find itself with new powers. 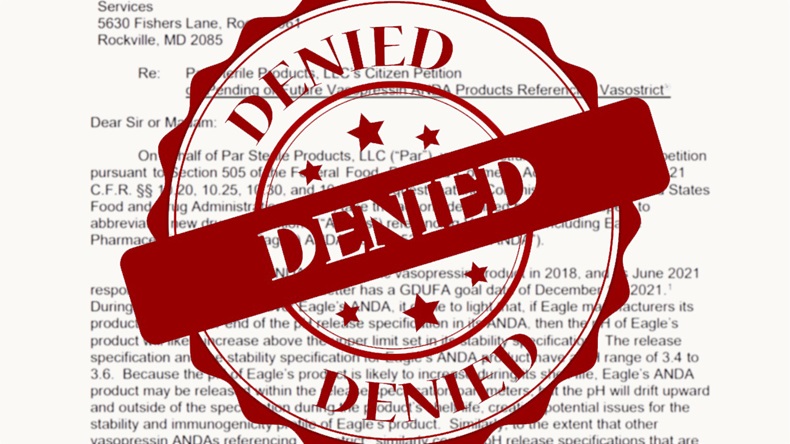 The US Food and Drug Administration took an unusually harsh tone in denying Par Sterile Products LLC’s citizen petition asking the agency not to approve generic versions of Vasostrict (vasopressin injection) until certain conditions are met.

The agency routinely receives such requests from brand manufacturers, but it took particular umbrage with the submission by Par, a subsidiary of Endo International plc. In a 15 December letter to Par attorney Chad Landmon, a partner at Axinn, Veltrop & Harkrider, the FDA said it would have grounds to deny the petition “because it appears to have been submitted with the primary purpose of delaying approval of Eagle Pharmaceuticals, Inc.’s ANDA and fails to raise valid scientific or regulatory issues.”

While the agency has the authority to reject petitions on the basis of intent to delay, it apparently has never done so.

“My jaw was on the floor,” Kurt Karst, a director at Hyman, Phelps & McNamara, said. “I’ve never, never seen that.”

The letter was signed by Douglas Throckmorton, deputy center director for regulatory programs in the Center for Drug Evaluation and Research, and CDER Director Patrizia Cavazzoni. They said FDA intends to refer the matter to the Federal Trade Commission, noting that the FTC has the tools and expertise to investigate anticompetitive business practices. Karst said such referrals are rare but have occurred.

The agency approved Eagle’s ANDA the same day it issued the letter denying Par’s petition. Vasostrict is indicated to increase blood pressure in adults with vasodilatory shock (e.g., post-cardiotomy or sepsis) who remain hypotensive despite fluids and catecholamines.

Generic approvals are supposed to be the low-hanging fruit of the drug pricing debate, with Democrats and Republicans alike saying they should be abundant, but the fact that the FDA continues to reach new rhetorical heights to swat away petitions suggests the problem isn’t exactly going away.

Still, there are some indications that pro-approval policies could be gaining steam that, while unlikely to eliminate all the roadblocks, could make ANDA approval smoother.

It seems quite possible that reforms to speed generic approvals could be included in the user fee renewal legislation next year. Bipartisan support for the concept, if not specific policy provisions, was shown during the 14 December confirmation hearing for Robert Califf to become FDA commissioner.

Sen. Bill Cassidy, (R-La.) asked Califf to “come back to this committee with recommendations as to how we’re going to address those legal tricks.” Cassidy was asking specifically about the impediments to complex generics, but seemed amenable to broader reforms.

One FTC Action On Citizen Petition

The mechanism that FDA used to deny Par’s petition was itself created through user fee renewal legislation. A provision of the FDA Amendments Act of 2007, Section 505(q), requires the agency to respond to petitions within a specified time frame and permits it to summarily deny a petition if it determines the petition was submitted with the primary purpose of delaying the approval of an application and does not on its face raise valid scientific or regulatory issues.

The FDA issued revised draft guidance on citizen petitions in 2018 saying if it determines a petition has been submitted with the primary purpose of delaying an application it would refer the matter to the FTC for possible enforcement action. ( (Also see "US FDA Amps Up "Name And Shame" Approach To Thwart Anti-Generic Tactics" - Pink Sheet, 2 Oct, 2018.) The final guidance was issued in September 2019.

The FTC has taken enforcement action against a company for allegedly abusing the citizen petition process in one instance.

In 2017, the commission sued Shire Pharmaceuticals Group PLC subsidiary Shire ViroPharma Inc. for submitting more than 40 filings, including 24 citizen petitions and three lawsuits against FDA. It alleged the filings were meritless and intended to delay approval of generic versions of Vancocin (vancomycin).

A district court dismissed the complaint, saying the alleged conduct had stopped almost five years before the suit was filed and that the FTC had not shown that Shire was about to violate any law enforced by the commission. (Also see "Shire's Citizen Petitions Too Old For FTC Action; Door Left Open For Amended Suit" - Pink Sheet, 27 Mar, 2018.)

Vasopressin, a polypeptide hormone produced by the body, was first marketed as a therapeutic agent in 1928, prior to enactment of the Food, Drug, and Cosmetic Act of 1938. In 2011, FDA issued guidance that it would begin to encourage vasopressin manufacturers to obtain evidence and comply with the approval provisions of the FDCA or remove their products from the market.

Par submitted a new drug application for Vasostrict injection in 2012 and FDA approved it in 2014.

Par has previously gotten into a skirmish with the FDA. In 2017, the company sued the agency for allowing bulk compounding using vasopressin. (Also see "Compounding Draft Guidance May End Par's Suit Against US FDA" - Pink Sheet, 25 Jan, 2018.)

Par’s 8 November citizen petition asked the agency to refrain from approving Eagle’s abbreviated new drug application or any other pending or future ANDA referencing Vasostrict unless the applicant has demonstrated that the product will stay within the stability specification parameters with respect to pH throughout the product’s shelf life.

“Because the pH of Eagle’s product is likely to increase during its shelf life, Eagle’s ANDA product may be released within the release specification parameters, but the pH will drift upward and outside of the specification during the product’s shelf life, creating potential issues for the stability and immunogenicity profile of Eagle’s product,” the petition states.

FDA asserted that the petition did not provide any evidence to support the claim of an “upward drift” in pH and also failed to disclose relevant data and information which are unfavorable to the petition and directly rebut the petition’s claims about Eagle’s ANDA.

FDA said the petition relies on proposed findings of fact submitted by the parties as its evidence and fails to address or acknowledge the court’s actual findings of fact, including findings that rejected an “upward drift” argument.

After receiving post-trial briefs, counsel for Par, who were not involved in the patent litigation, sent a letter to FDA in September requesting the agency not approve Eagle’s ANDA in its current form. The petition says FDA sent a response letter on 27 October directing Par to submit its request as a citizen petition to allow Eagle and others the opportunity to comment and participate in the decision-making process.

The agency refuted that characterization. “FDA did not ‘direct’ Par to submit a petition. Rather, the agency informed Par that a letter raising such concerns was not appropriate because it does not allow for these issues to be considered in a public manner,” the agency stated.

FDA cited other “significant problems” with the petition, including Par’s failure to submit trial exhibits referenced in the petition and to address the court’s findings of fact.

Landmon addressed the agency’s concerns in a 6 December letter to FDA responding to Eagle’s comments on the petition.

“Par did not submit its citizen petition for any anticompetitive reason or to cause a delay, but submitted it to raise to FDA a valid scientific and regulatory issue still unaddressed by Eagle,” Landmon wrote.

US FDA’s Patent ‘Concerns’ Include Thickets, Product Hopping, And Evergreening

Compounding Draft Guidance May End Par's Suit Against US FDA