Russia’s Sputnik V vaccine gets the all-clear in India as the COVAX initiative hits the shortages speed bump. Also, two more antibody treatments are OKd for use in COVID-19 in the UK. 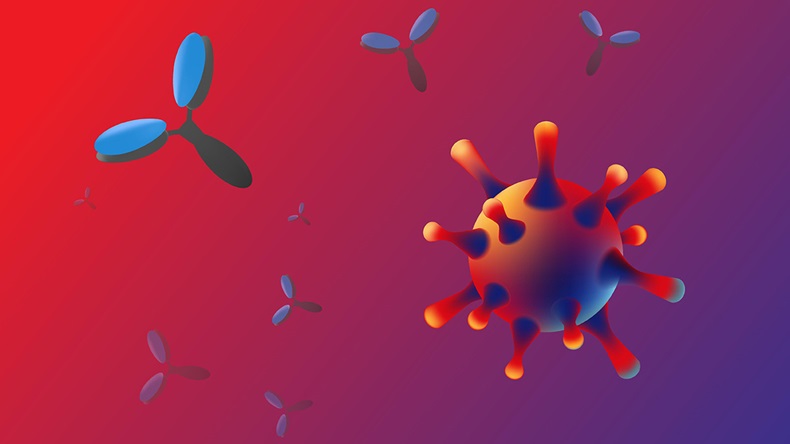 Coronavirus vaccine shortages are very much in the news on a global level, exacerbated by supply restrictions in India. New safety scares associated with vaccines from AstraZeneca PLC and Janssen Pharmaceutical Cos. will have done nothing to inspire confidence in the global rollout.

The European Medicines Agency said last Friday that its drug safety committee, the PRAC, was investigating not only rare and unusual blood clots with the AZ vaccine (Vaxzevria) but also the risk of capillary leak syndrome in people who have been given the vaccine.

The EMA also announced a PRAC review of four cases of blood clots combined with low platelet counts in patients taking the Janssen vaccine, saying it was “currently not clear whether there is a causal association” and that regulatory action would be taken if necessary. (Also see "Coronavirus Notebook: EMA Probes Janssen Vaccine Blood Clot Reports, UK Advises 12-Week Dosing Gap For Moderna" - Pink Sheet, 9 Apr, 2021.)

Matters escalated on 13 April when the US Food and Drug Administration said it was recommending suspension of the vaccine on the back of six cases of the rare blood clotting disorder with low platelets. Janssen’s parent company, Johnson & Johnson, said it would “proactively delay” the rollout of the vaccine in the EU, which was due to begin in the next couple of weeks.

The UK regulator, the MHRA, had been thought to be preparing to announce its authorization of the Janssen vaccine shortly.

Amid these moves, the fact that another potential jab, this time developed by Italian company ReiThera SRL, is embarking on a Phase II/III trial on the back of positive Phase I results in healthy volunteers should be welcome news.

The COVITAR study, which will take place at 26 sites in Italy and one in Germany, will assess the safety, immunogenicity and efficacy of the firm’s GRAd-COV2 vaccine against placebo in adults aged over 18. The first part will be a Phase II trial to confirm safety and immunogenicity and to allow selection of the dosage regime for the Phase III part.

GRAd-COV2 is based on what the company calls a novel and proprietary replication-defective simian adenoviral vector (GRAd) encoding the full-length coronavirus spike protein. It is a species C adenovirus – these are considered the most potent vectors for delivering vaccine and they have low seroprevalence in humans, which means that “GRAd vaccine immunogenicity is not diminished by pre-existing anti-human adenovirus antibodies,” ReiThera noted.

Phase I data showed a single inoculation with GRAd-COV2 was well tolerated and generated spike-binding and neutralizing antibodies and T-cell responses with three different doses, with similar results in both volunteer cohorts – 45 adults aged 18-55 and 45 aged 65-85, the company said. The results of the interim analysis are being prepared for publication.

The Phase II trial aims to enrol 900 participants randomized to receive a single dose, two doses or placebo, with vaccine or placebo being on Day 1 and Day 22. A recommendation to move to the Phase III study and to select the vaccine scheduled will be based on safety results and immunogenicity data after five weeks from the first vaccination in the first 450 enrollees (about 150 subjects per study arm).

“ReiThera will base its decision on guidance from the European Medicines Agency (EMA) on the most appropriate clinical development plan to be implemented in countries where authorized vaccines are being rolled out,” the company said.

Meanwhile, the global vaccine supply situation appears to be deteriorating after data from UNICEF showed that deliveries through the COVAX initiative have slowed, with fewer than two million doses cleared for supply to 92 less well-off countries over the past couple of weeks.

The main cause of the shortfall is India’s decision to stop exporting products from Serum Institute of India, which produces most of the Oxford/AstraZeneca vaccine doses for distribution through COVAX. The vaccines alliance Gavi, one of the partners in COVAX, said 60 countries were affected by delivery delays.

COVAX was set up to ensure equitable access to COVID-19 vaccines around the world; all vaccines supplied through the initiative must be pre-cleared by the World Health Organization.

Internal WHO documents show that uncertainty about deliveries is “causing some countries to lose faith in the COVAX (effort),” said a report by the Associated Press. “That is prompting WHO to consider speeding up its endorsement of vaccines from China and Russia, which have not been authorized by any regulators in Europe or North America.”

One vaccine that could help fill a gap is Russia’s Sputnik V, which was developed by the Gamaleya National Center of Epidemiology and Microbiology and is backed by the Russian Direct Investment Fund.

The vaccine caused controversy when it was first registered in Russia before Phase III trials had been conducted, but it has since been steadily making its mark around the world, with the RDIF claiming it has now been approved for use in 60 countries.

The latest country to give the all-clear is India, whose Drug Controller General has issued an emergency use authorization, the RDIF announced on 12 April. “Sputnik V is one of only three coronavirus vaccines registered by India’s regulatory authorities,” it declared.

“India is the most populated country to register the Russian vaccine,” the fund noted, adding that the “total population of 60 countries where Sputnik V is approved for use is 3 billion people or about 40% of the global population.”

RDIF CEO Kirill Dmitriev said the approval of the vaccine in India was “a major milestone,” noting that Russia and India “have been developing an extensive cooperation on clinical trials of Sputnik V in India and its local production.”

The RDIF has reached agreements with a number of leading Indian firms – Gland Pharma, Hetero Biopharma, Panacea Biotec, Stelis Biopharma and Virchow Biotech – “aimed at production of more than 850 million doses per year.” This, the fund said, was “sufficient to vaccinate more than 425 million people around the world.”

Dmitriev told a 13 April press conference that “some of the Indian companies were already producing Sputnik and actually some already had passed all of the necessary checks and quality controls that are done in Russia.” Ramping-up to “the highest capacity” would take two to three months, he said, adding that he believed "we will see more than 50 million doses of Sputnik a month or more produced in India."

Dmitriev did not answer a written question on how many doses of the vaccine have actually been delivered to any of the 60 countries where its use has been cleared.

Sputnik has not yet been authorized in the EU, the UK or the US. It is under a rolling review at the European Medicines Agency, but unlike all the other major vaccines or candidates, it is not part of the European Commission’s COVID-19 vaccine procurement portfolio. Earlier this year, the RDIF said it had “no immediate plans” to file for approval in either the UK or the US. (Also see "Coronavirus Notebook: Russia Has “No Immediate Plans” To File Sputnik V In UK Or US; EU Pressured On Vaccine Contract Disclosure" - Pink Sheet, 2 Feb, 2021.)

Efforts are continuing to identify possible new uses of existing drugs to treat COVID-19 patients, and not just those where a patient's condition has required hospitalization.

Researchers from the University of Cambridge, the European Bioinformatics Institute (part of the European Molecular Biology Laboratory), VA Boston Healthcare System in the US and the Istituto Italiano di Tecnologia have identified the IFNAR2 (interferon-alfa receptor 2) and ACE2 (angiotensin-converting enzyme 2) proteins as targets for potential drugs for the early management of COVID-19.

In a study published in Nature Medicine, they call for clinical trials on drugs targeting these proteins, saying that prescribing such products after diagnosis but before the patient’s condition requires hospitalization could help to minimize symptoms and reduce the number of patients requiring critical care.

The researchers used computational analysis methods and the ChEMBL bioactivity database to identify 1,263 druggable genes – the “actionable druggable genome” – and then investigated the prevalence of genetic variants in these genes within two large datasets from the VA’s Million Veteran Program and the COVID-19 Host Genetics Initiative.

Of these 1,263, the researchers say “we noted 700 proteins that are targets for drugs with potential relevance to COVID-19 from cell-based screening, registers of clinical trials against COVID-19 or approved immunomodulatory/anticoagulant drugs (given the clear role of these pathways in COVID-19 outcomes) or have biological evidence for the role of the protein in SARS-CoV-2 infection.”

A total of 7,554 hospitalized COVID-19 patients and more than one million controls were included in the analysis, and this approach provided genetic evidence for drugs targeting the IFNAR2 and ACE2 proteins, according to the researchers.

“We are the first to implicate a causal role for ACE2 in COVID-19 manifestations using MR [Mendelian randomization] techniques; we have also implicated IFNAR2 in COVID-19, concordant with recent studies," the researchers add. “However, the current study notably complements and extends previous efforts by employing key approaches to protect against potential biases, strengthen causal inference and enhance understanding of potential mechanisms.”

These two drug repurposing opportunities “need to be evaluated in adequately powered randomized trials to investigate their efficacy and safety for early management of COVID-19,” they conclude.

Tocilizumab/Sarilumab OKd For COVID-19 In UK

Efforts by the UK have already led to the availability of several existing medicines for COVID-19, the latest being tocilizumab (Roche's Actemra) and sarilumab (Sanofi/Regeneron Pharmaceuticals' Kevzara). The two antibodies are now being offered through the multi-agency Research To Access Pathway for Investigational Drugs for COVID-19 (RAPID-C19) initiative, which was set up in April 2020 to speed up access to treatments shown to be safe, effective and offering a clinical benefit.

RAPID-C19 involves a number of organizations including National Health Service bodies, the MHRA, the health technology assessment bodies for England/Wales and Scotland (NICE and the SMC), the All Wales Medicines Strategy Group and the Northern Ireland Health and Social Care Board.

Last year the initiative helped support early access to remdesivir (Gilead Sciences's Veklury), dexamethasone and hydrocortisone, which are licensed for COVID-19 or being used within existing marketing authorizations.

Following the publication of the large-scale UK randomized controlled trials, REMAP-CAP and RECOVERY, interim clinical commissioning policies have now been circulated covering the off-label use of tocilizumab and sarilumab. The products can now be prescribed for eligible hospitalized patients with COVID-19 pneumonia, the SMC said.

Under the RAPID-19 process, all national and international trials for COVID-19 treatments are scanned and NICE gathers relevant information from sources such as collaborating organizations and other sources. This information helps the development of briefing notes and rapid action plans for the RAPID C-19 oversight group. RAPID-C19 oversight group review looks at the briefing notes to identify treatments for accelerated access, which could be done through license extensions and revisions. NHS England and NHS Improvement make sure the treatments can actually be delivered, via a commissioning policy or evidence review, and NICE starts the HTA process.

NICE has also issued a new COVID-19 rapid guideline bringing together all its recommendations on managing the disease, which updates and replaces a range of earlier rapid guidelines as well as the original rapid evidence summaries on remdesivir, tocilizumab and sarilumab.

Coronavirus Notebook: Russia Has “No Immediate Plans” To File Sputnik V In UK Or US; EU Pressured On Vaccine Contract Disclosure